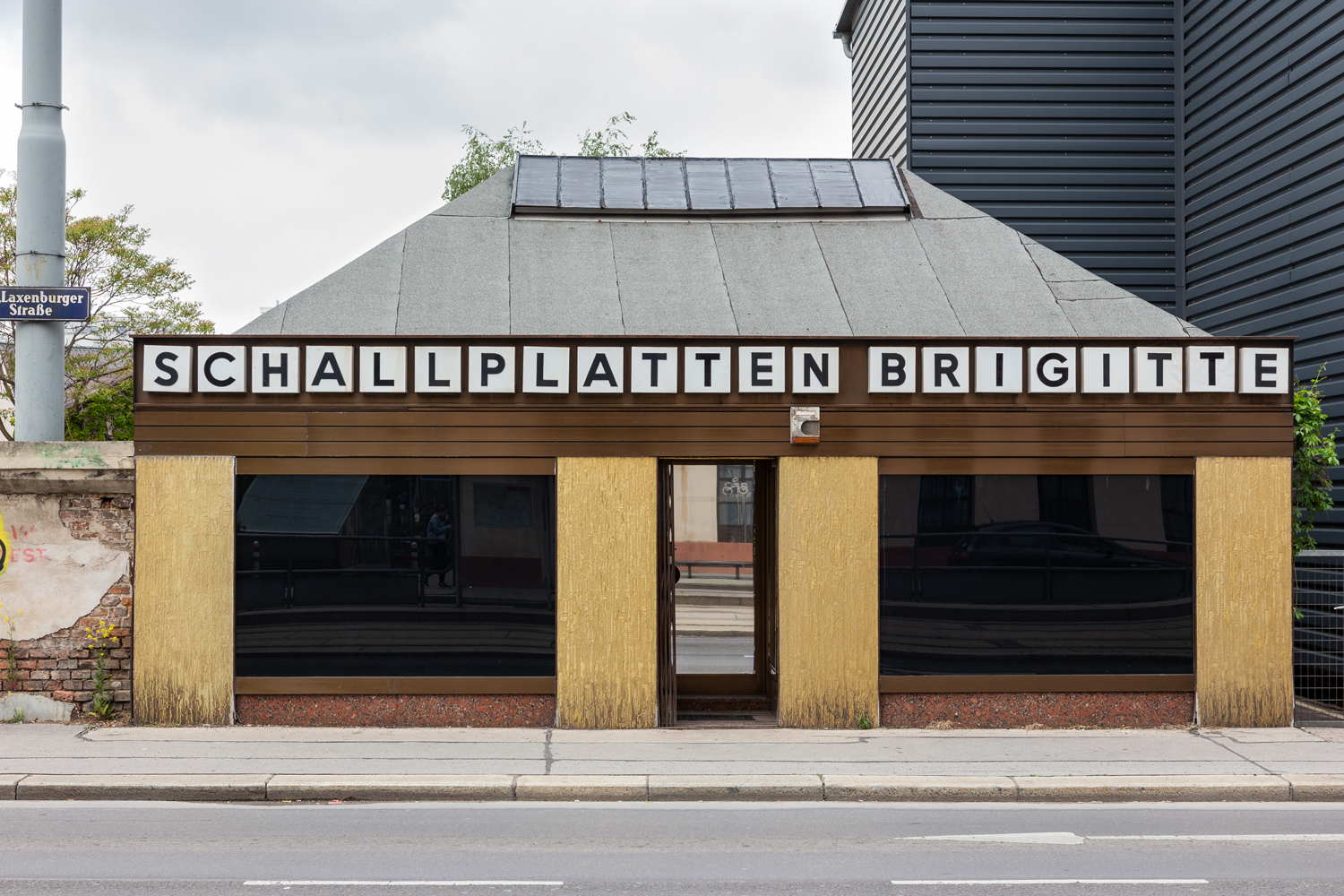 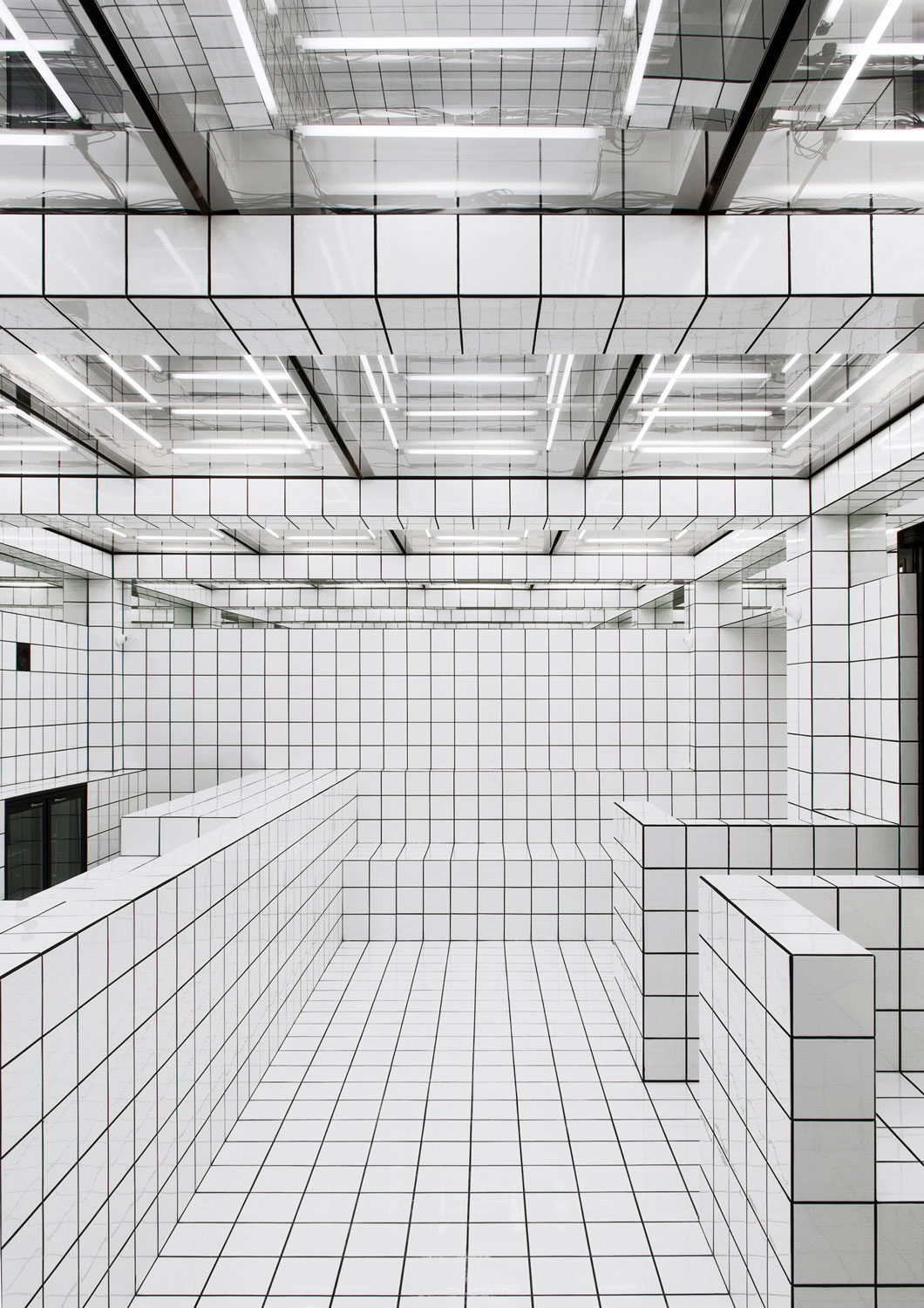 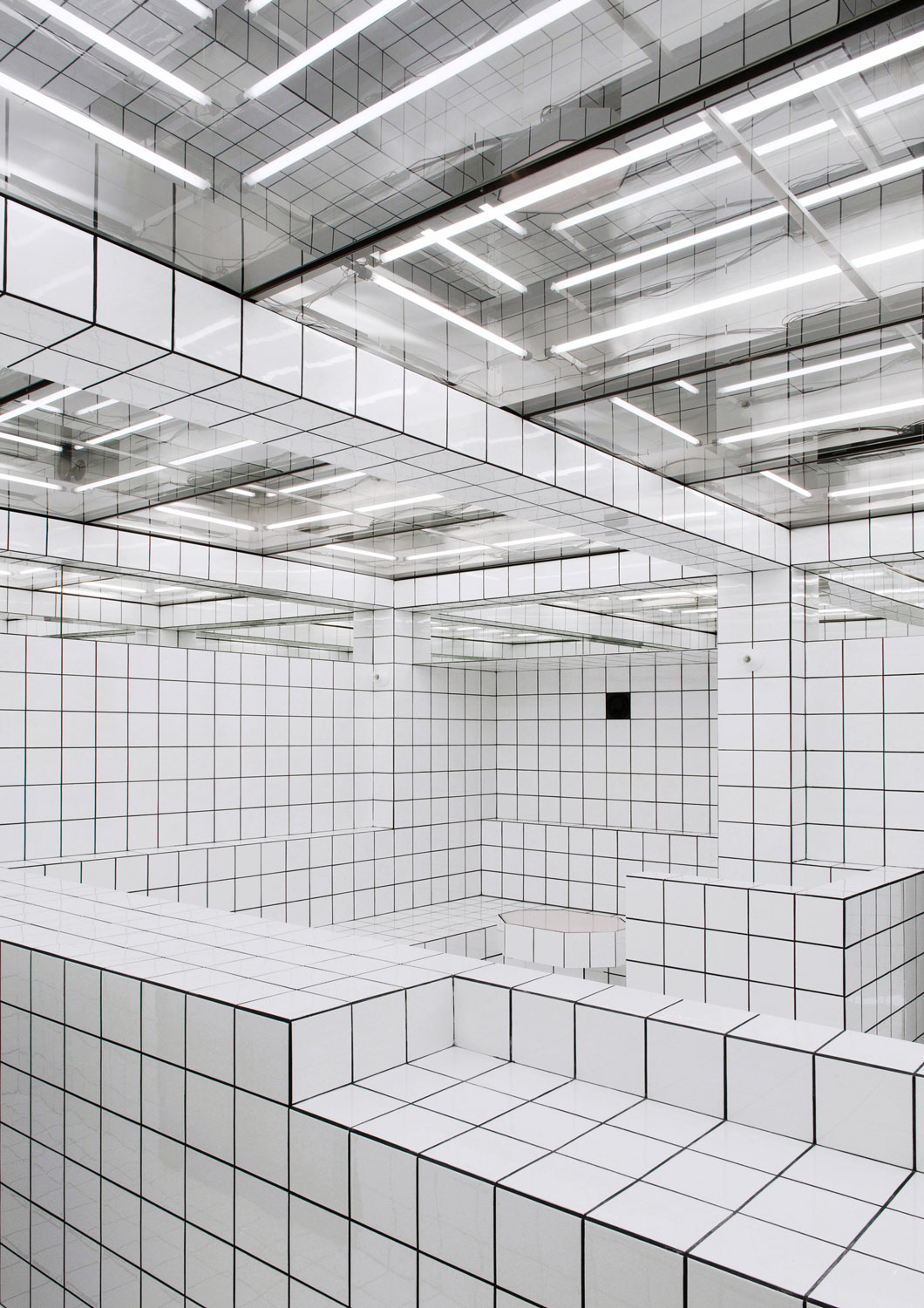 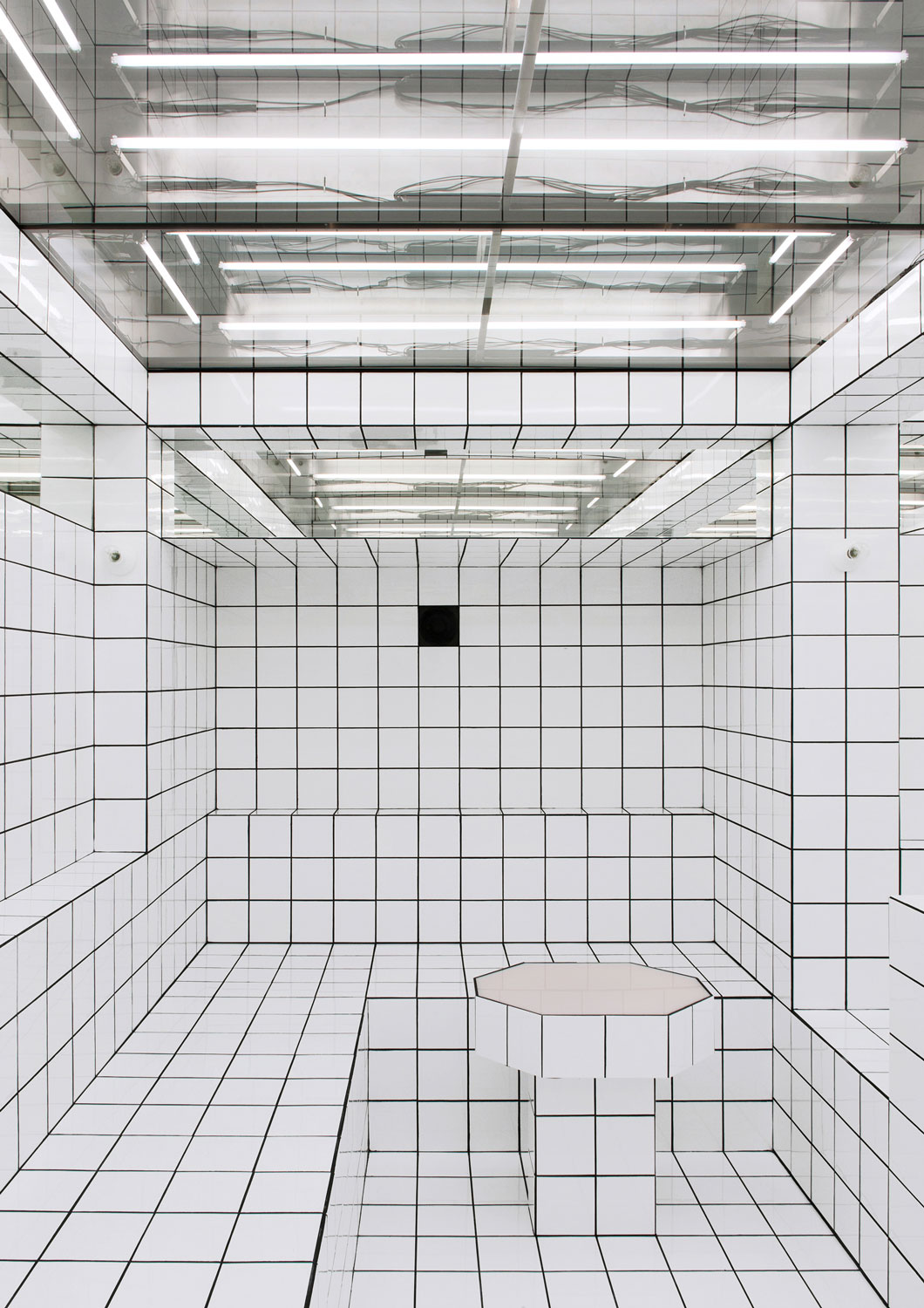 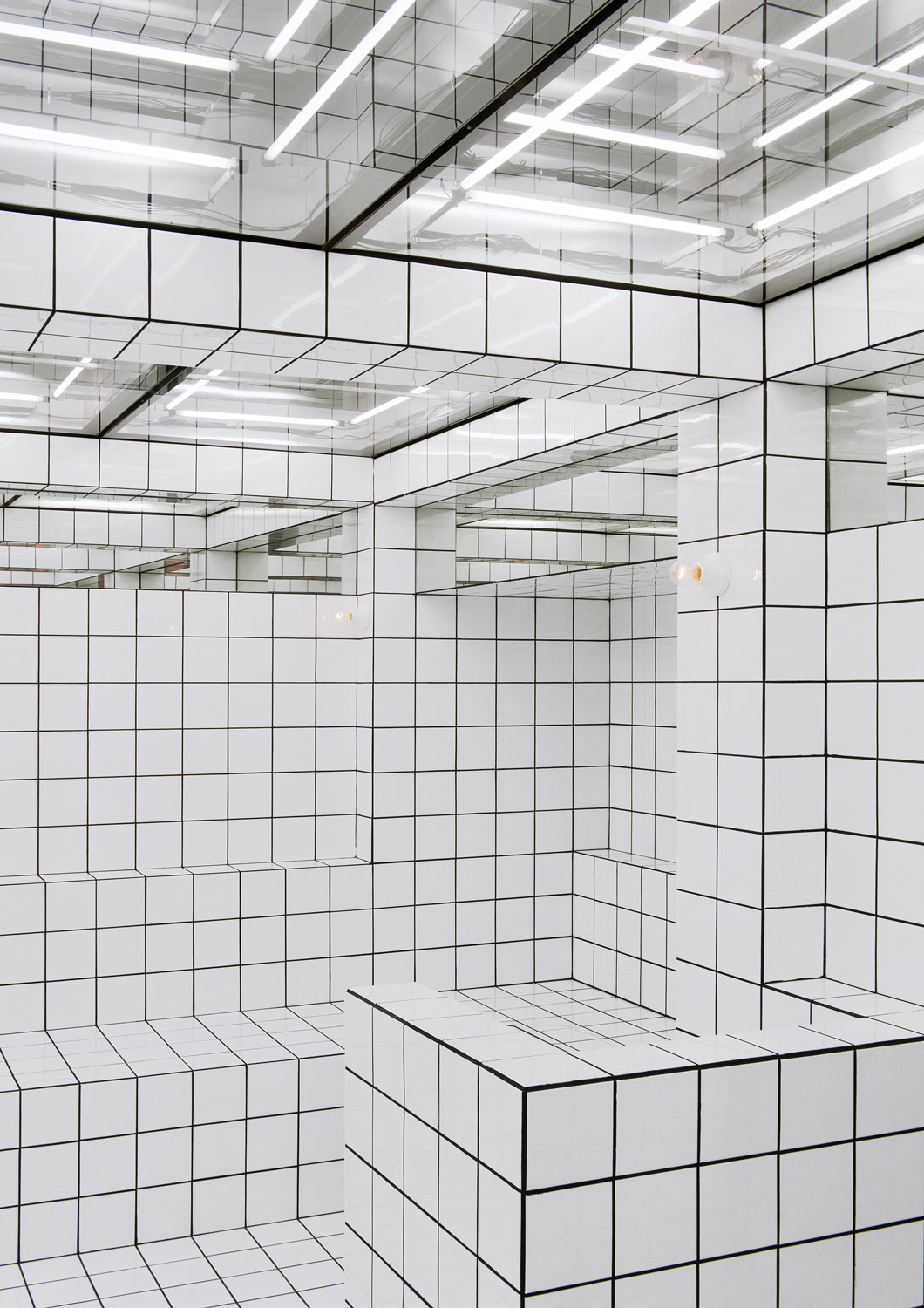 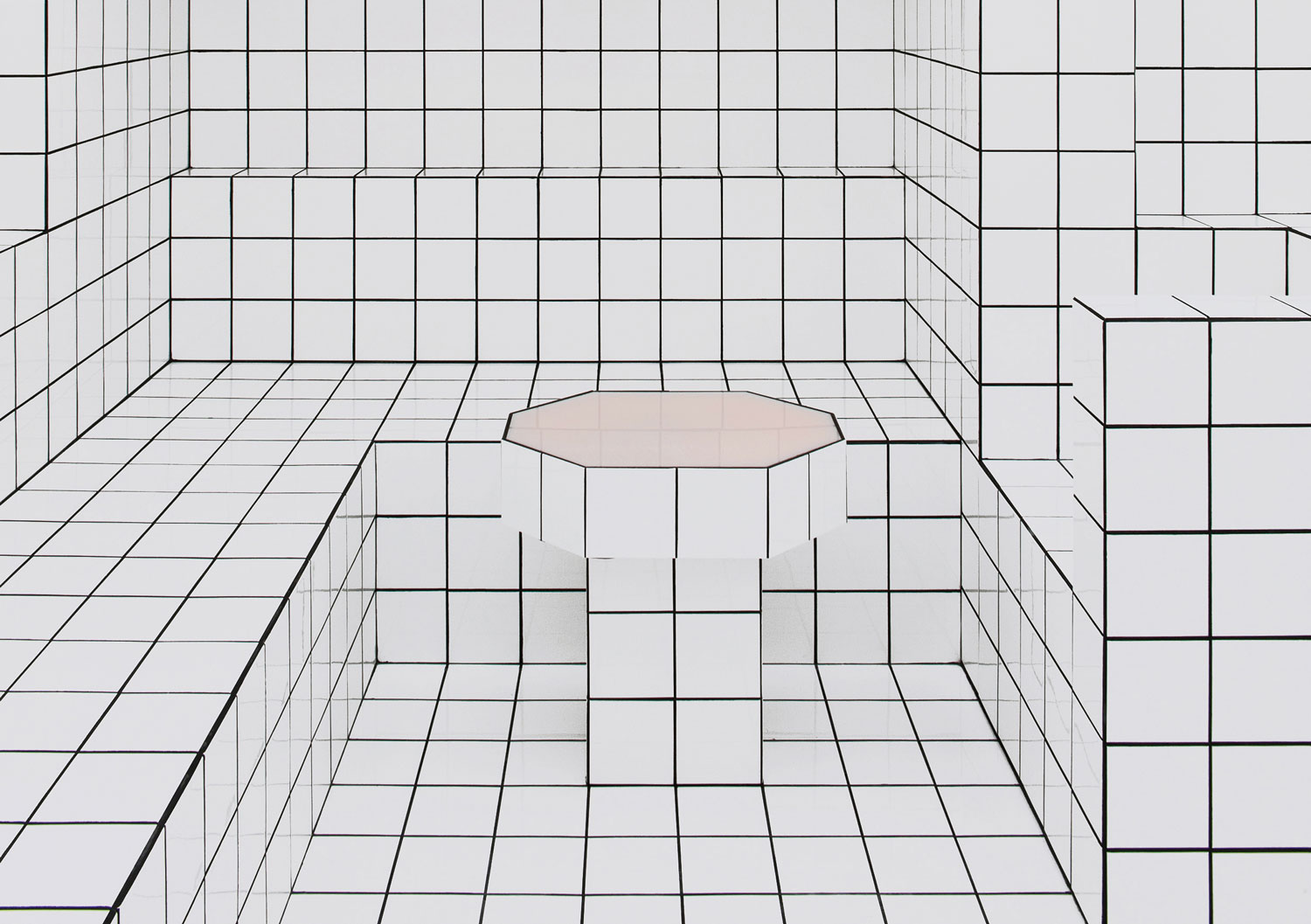 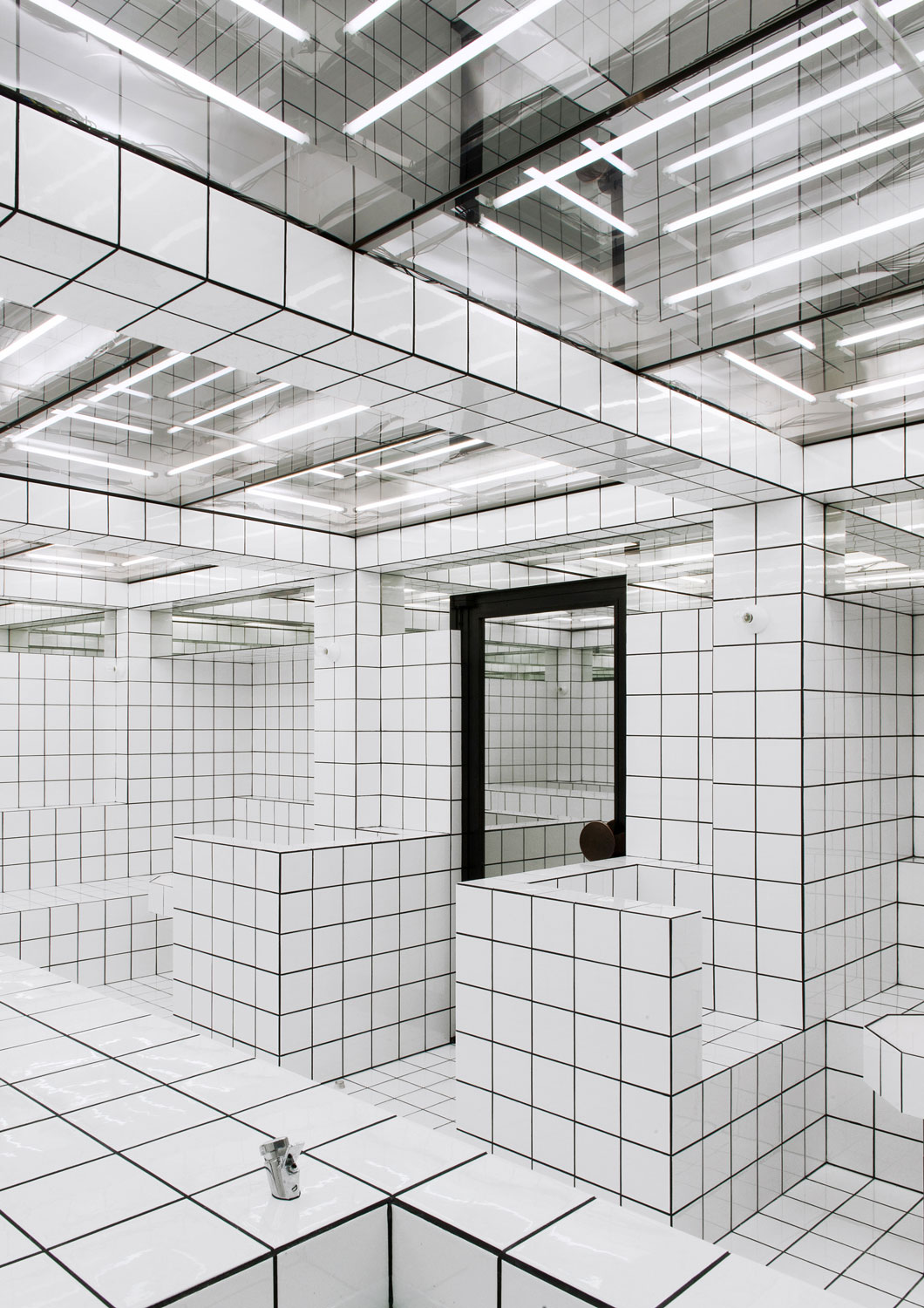 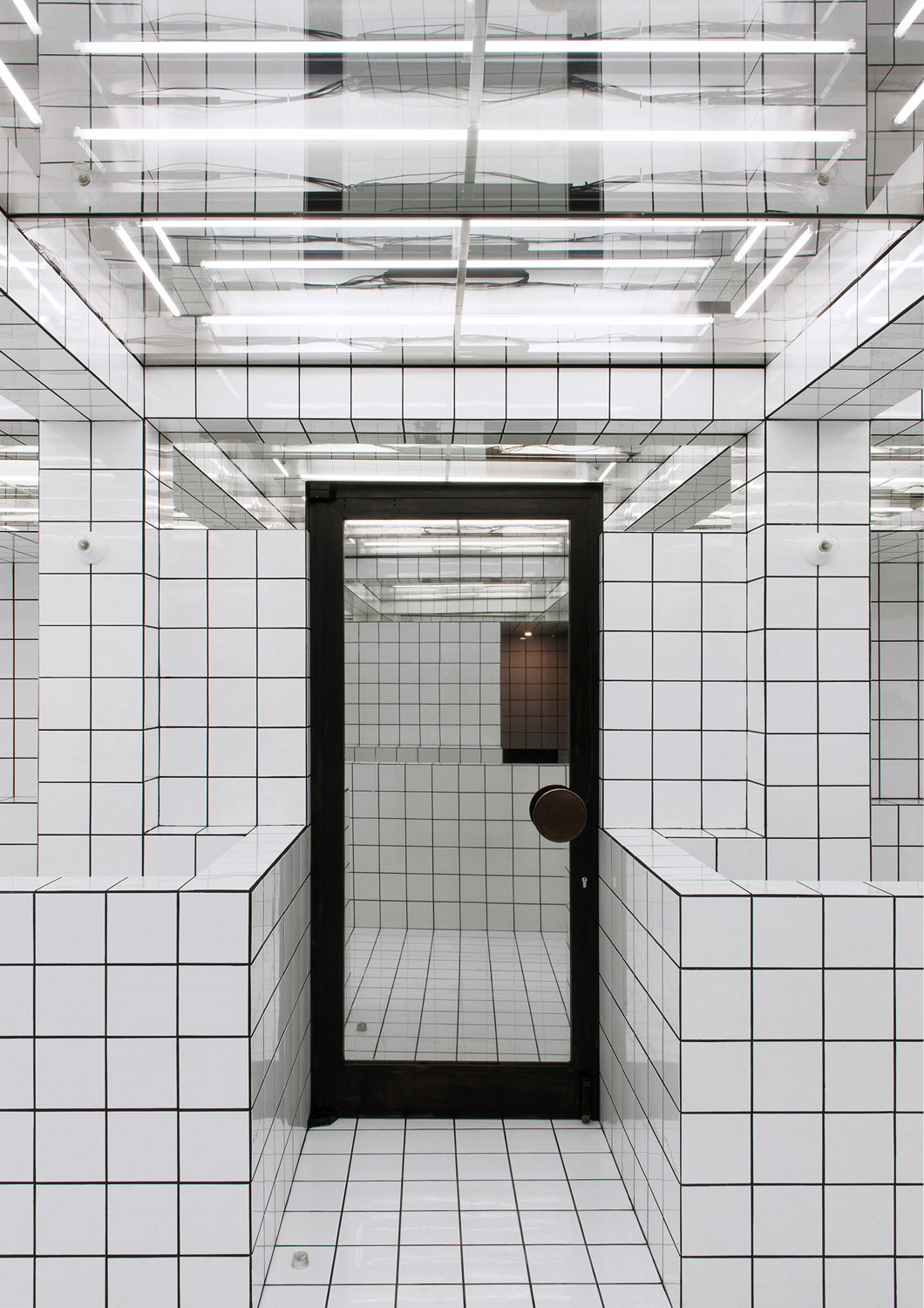 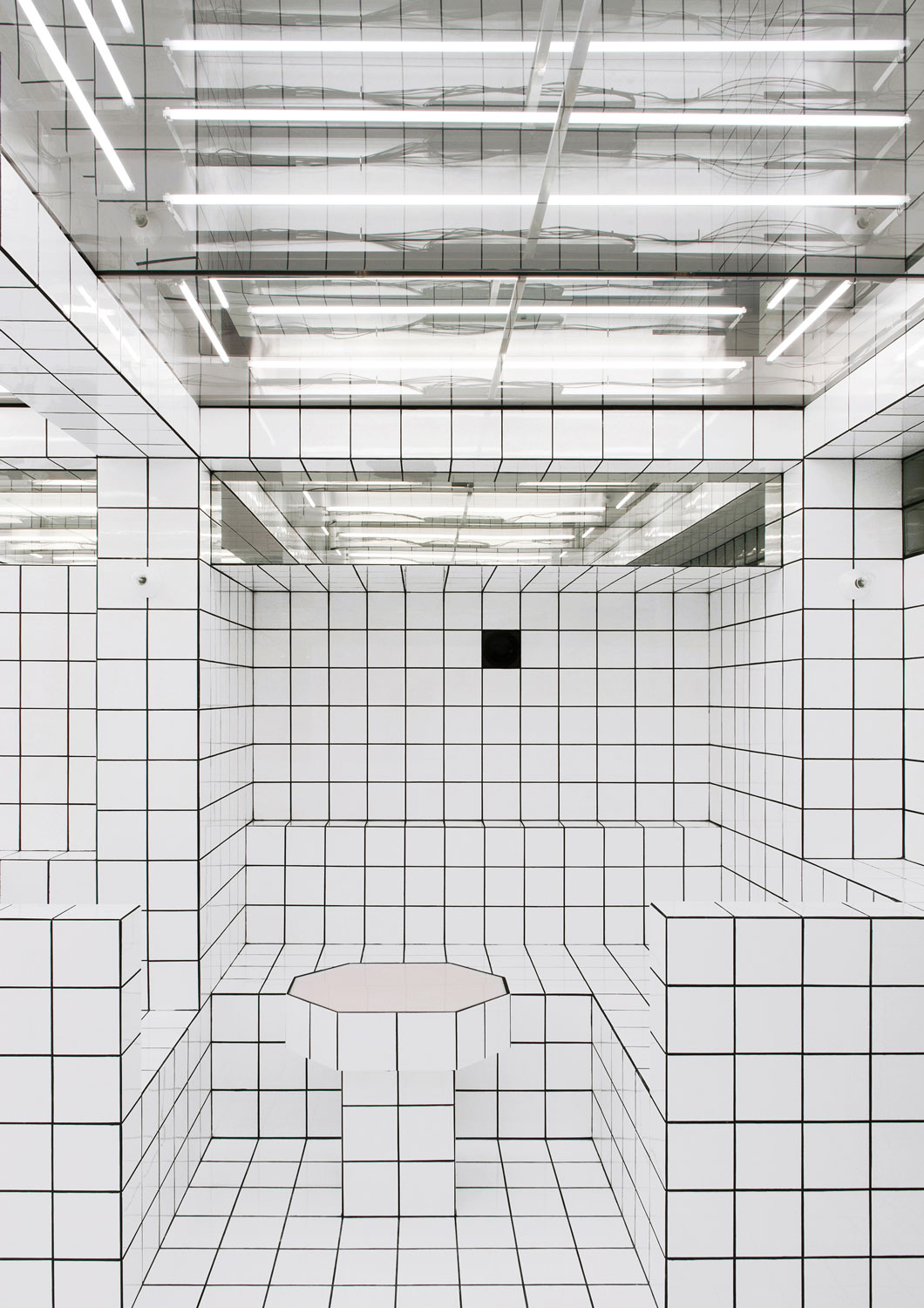 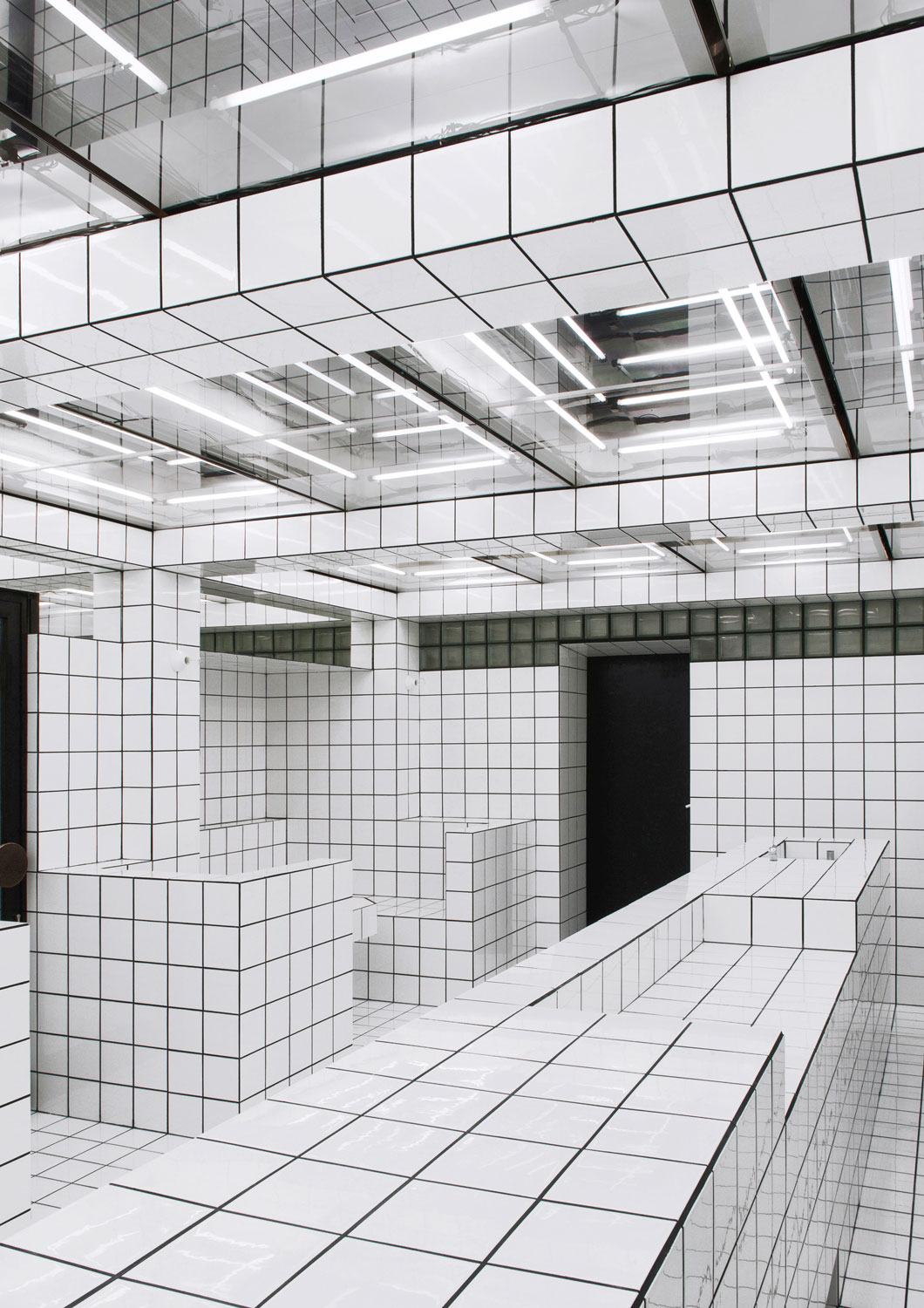 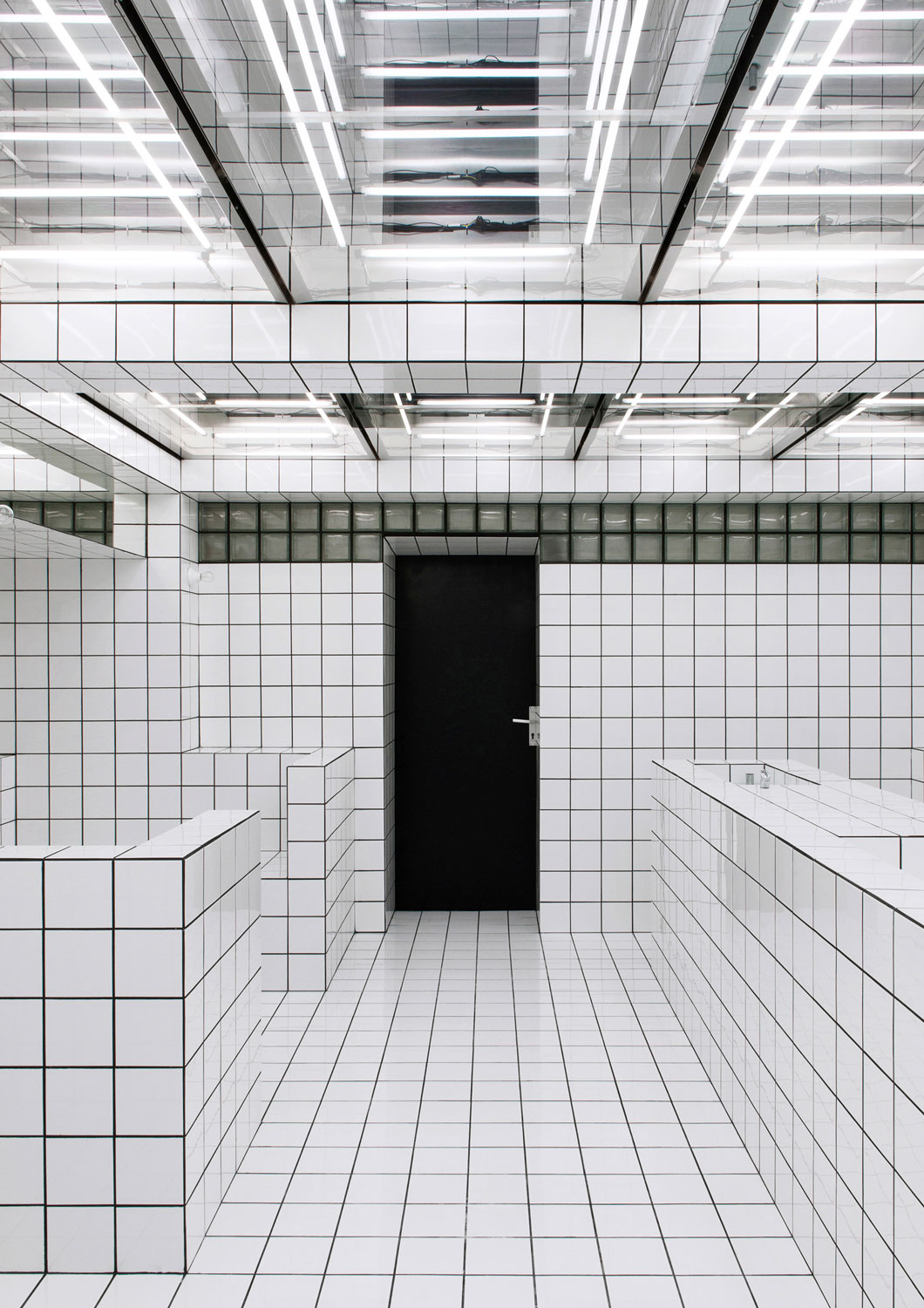 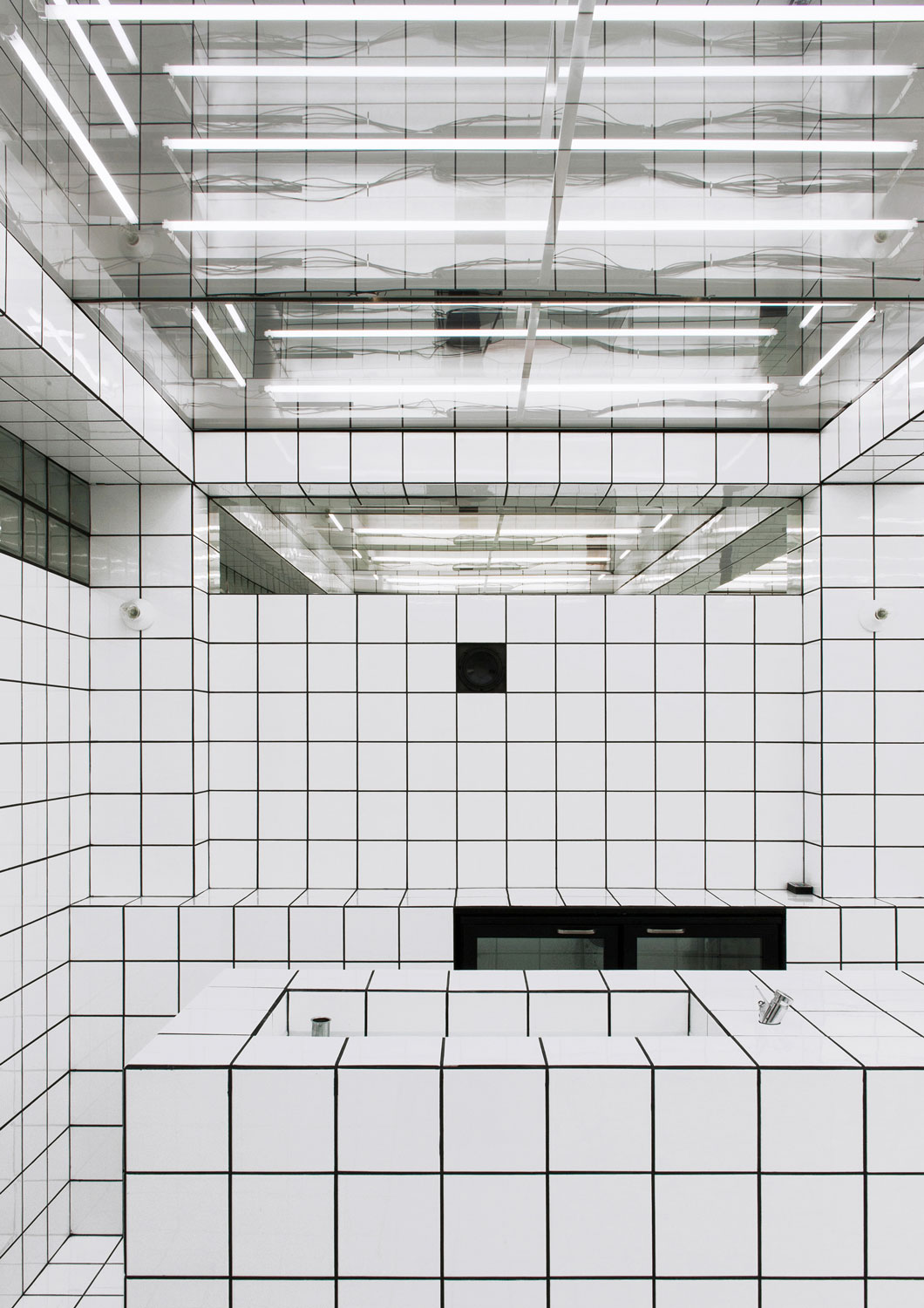 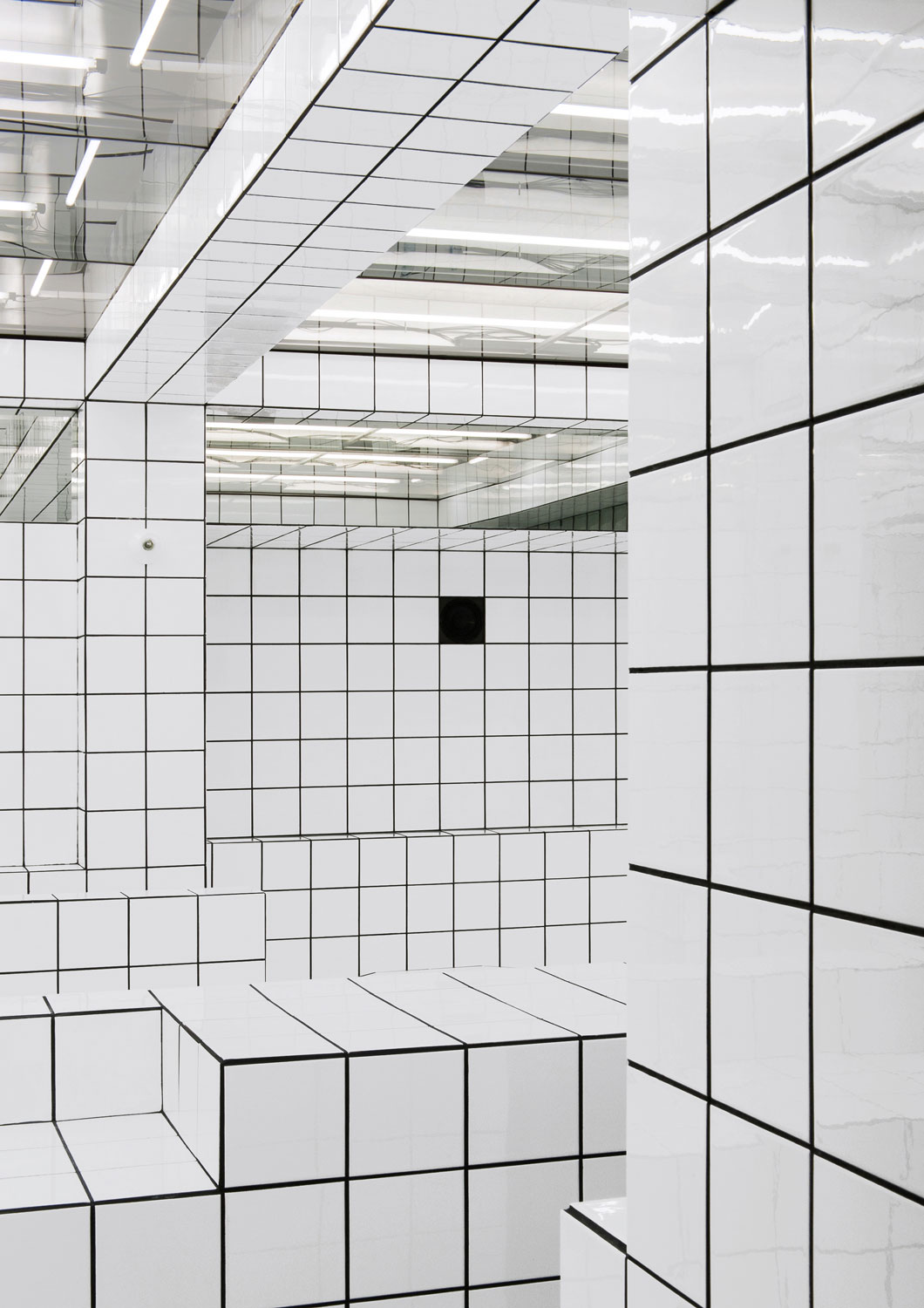 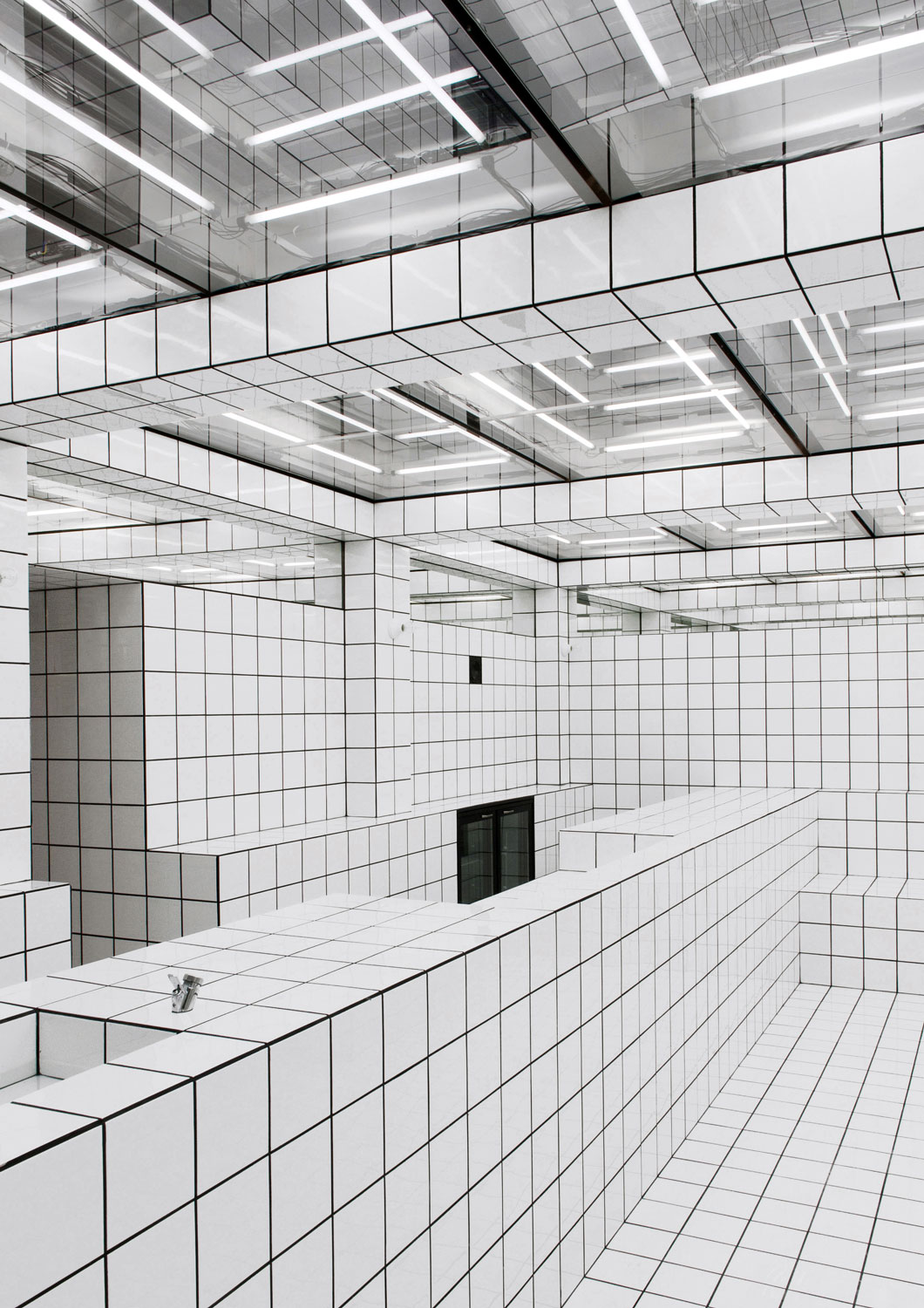 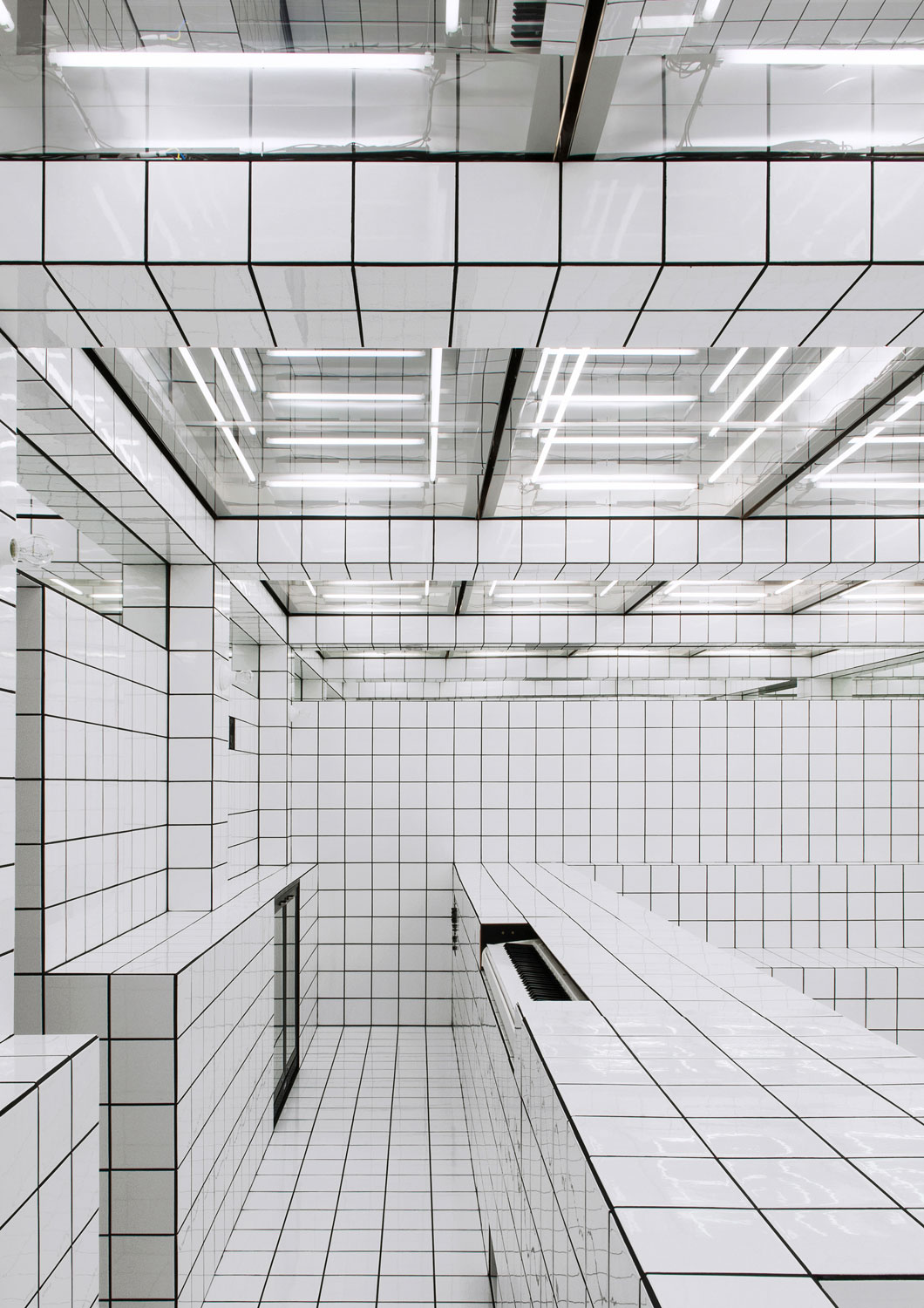 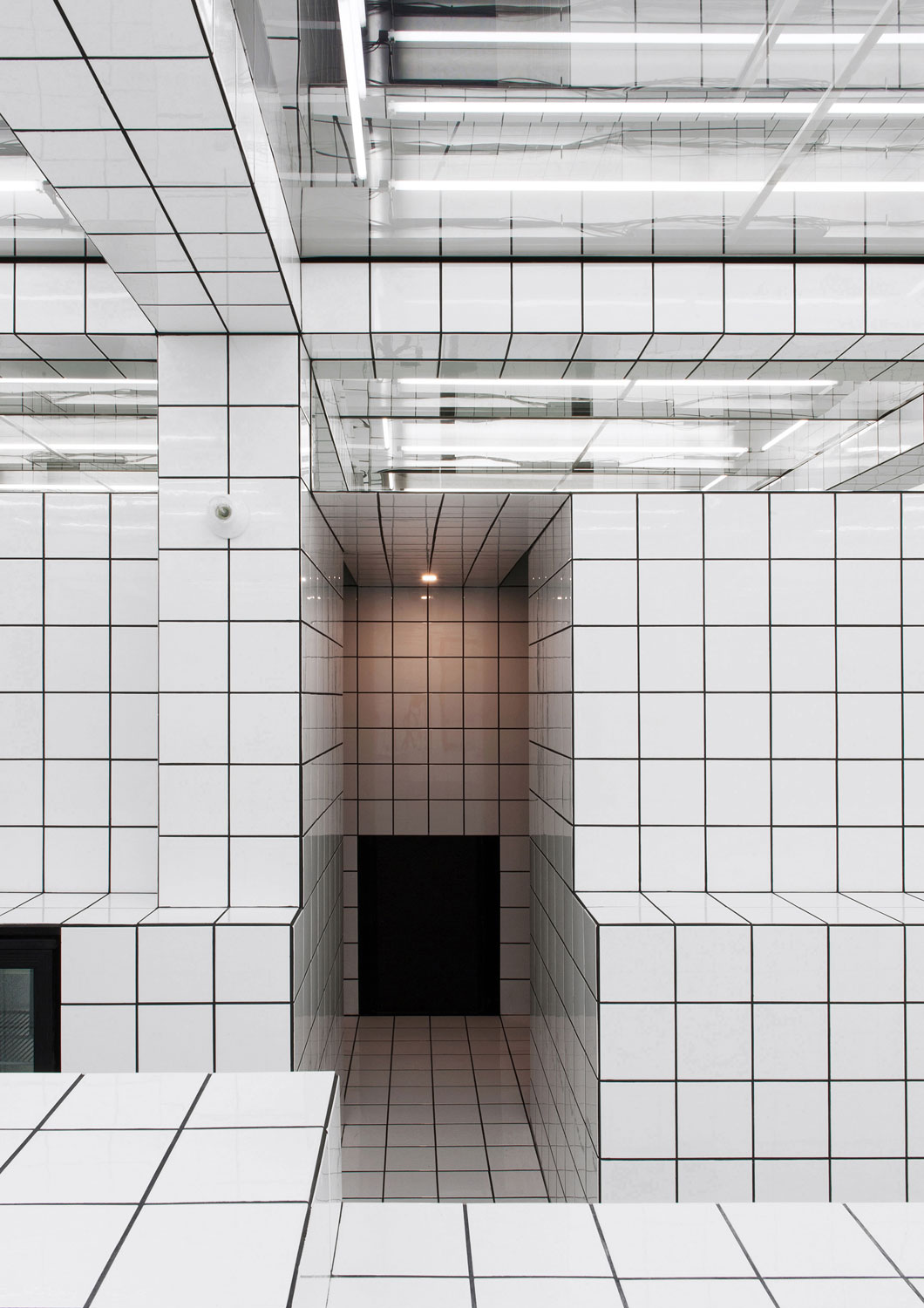 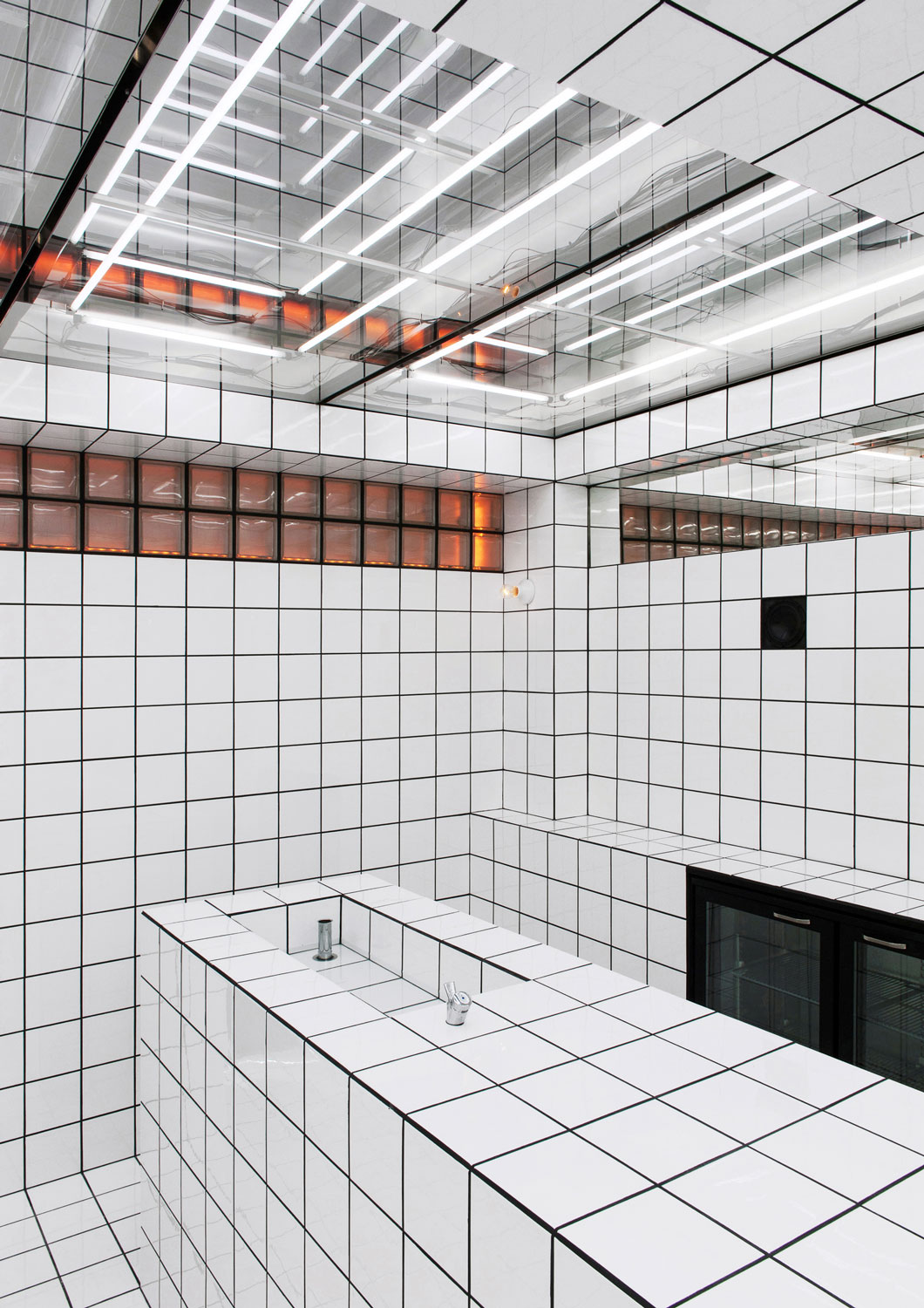 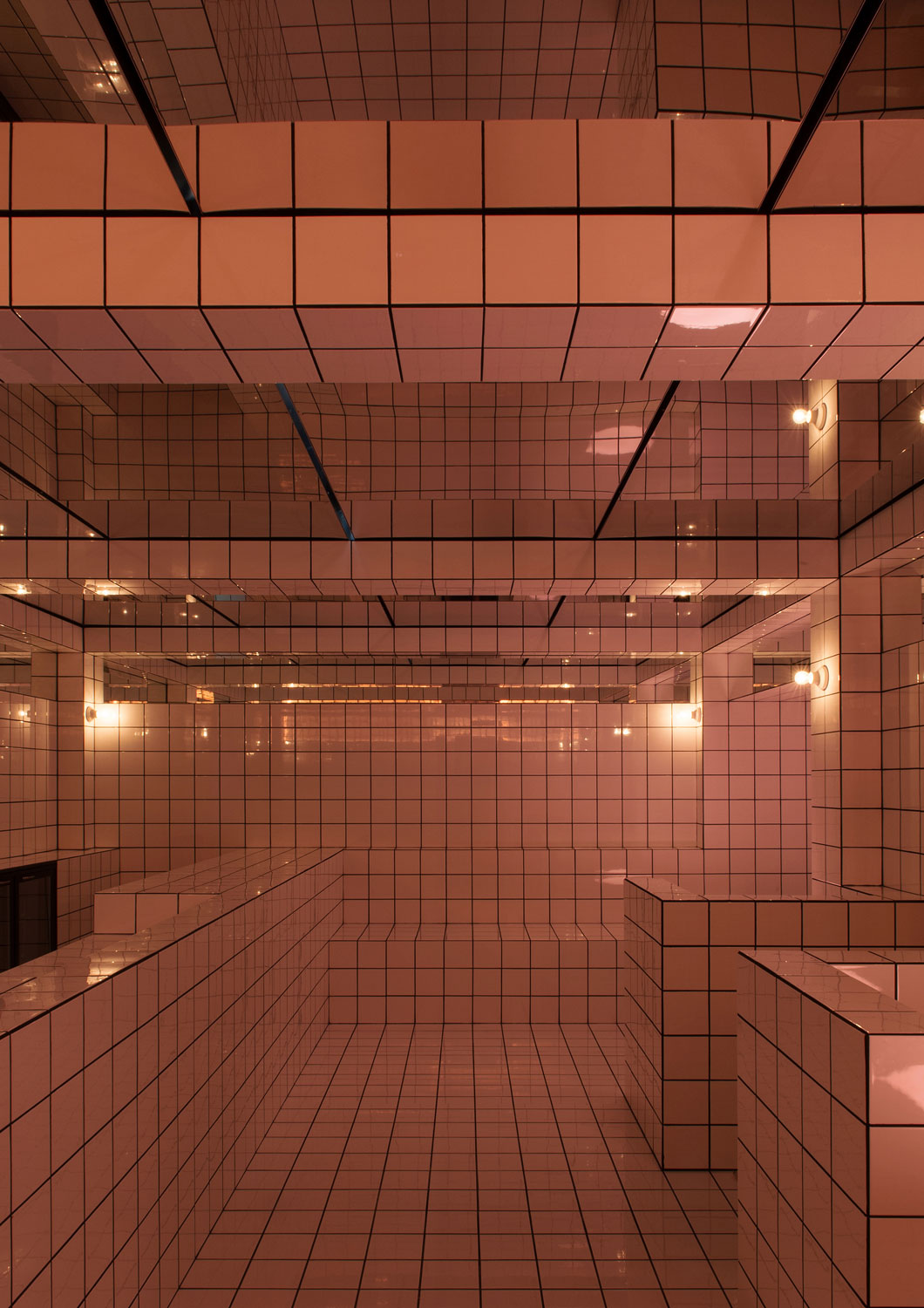 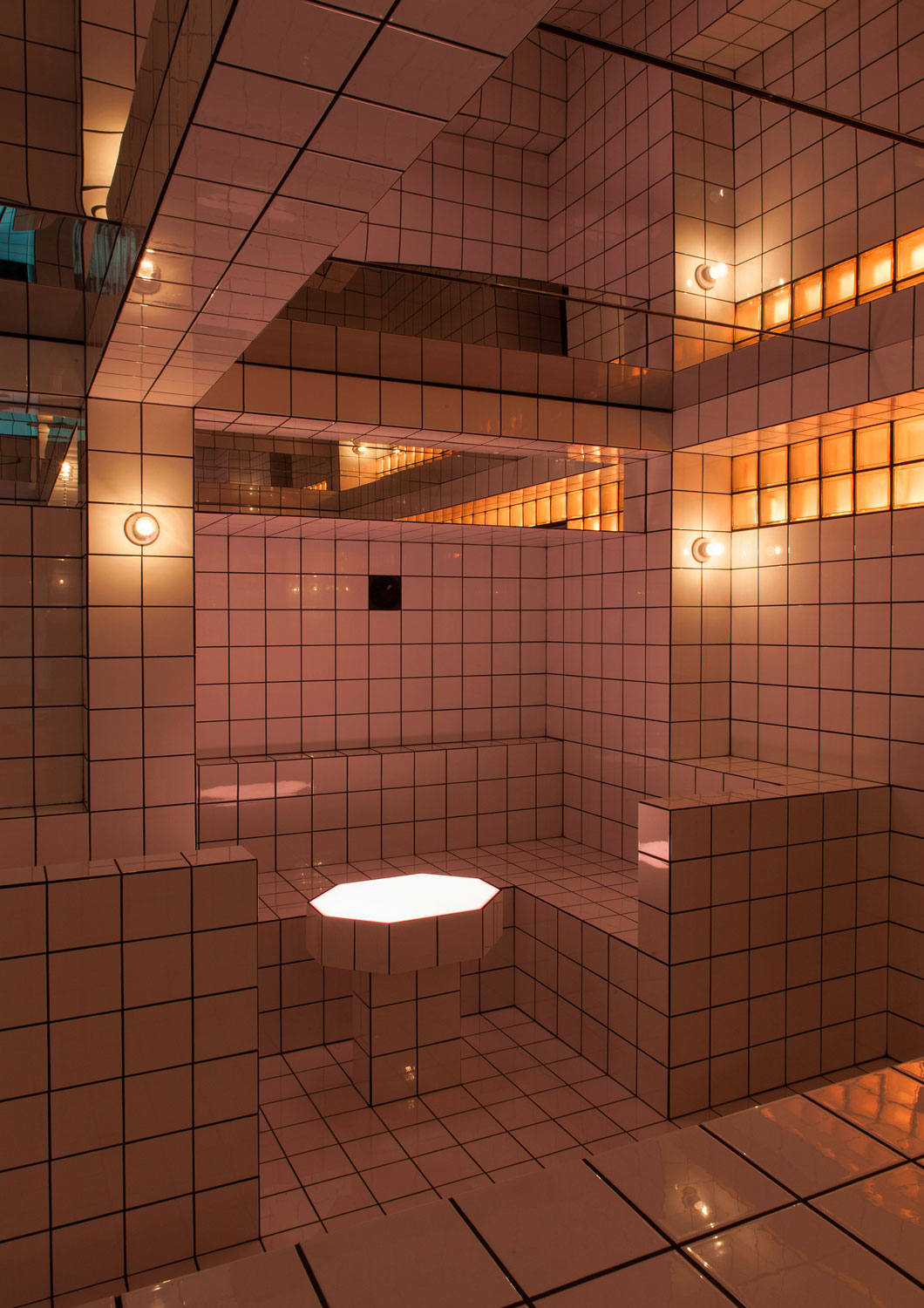 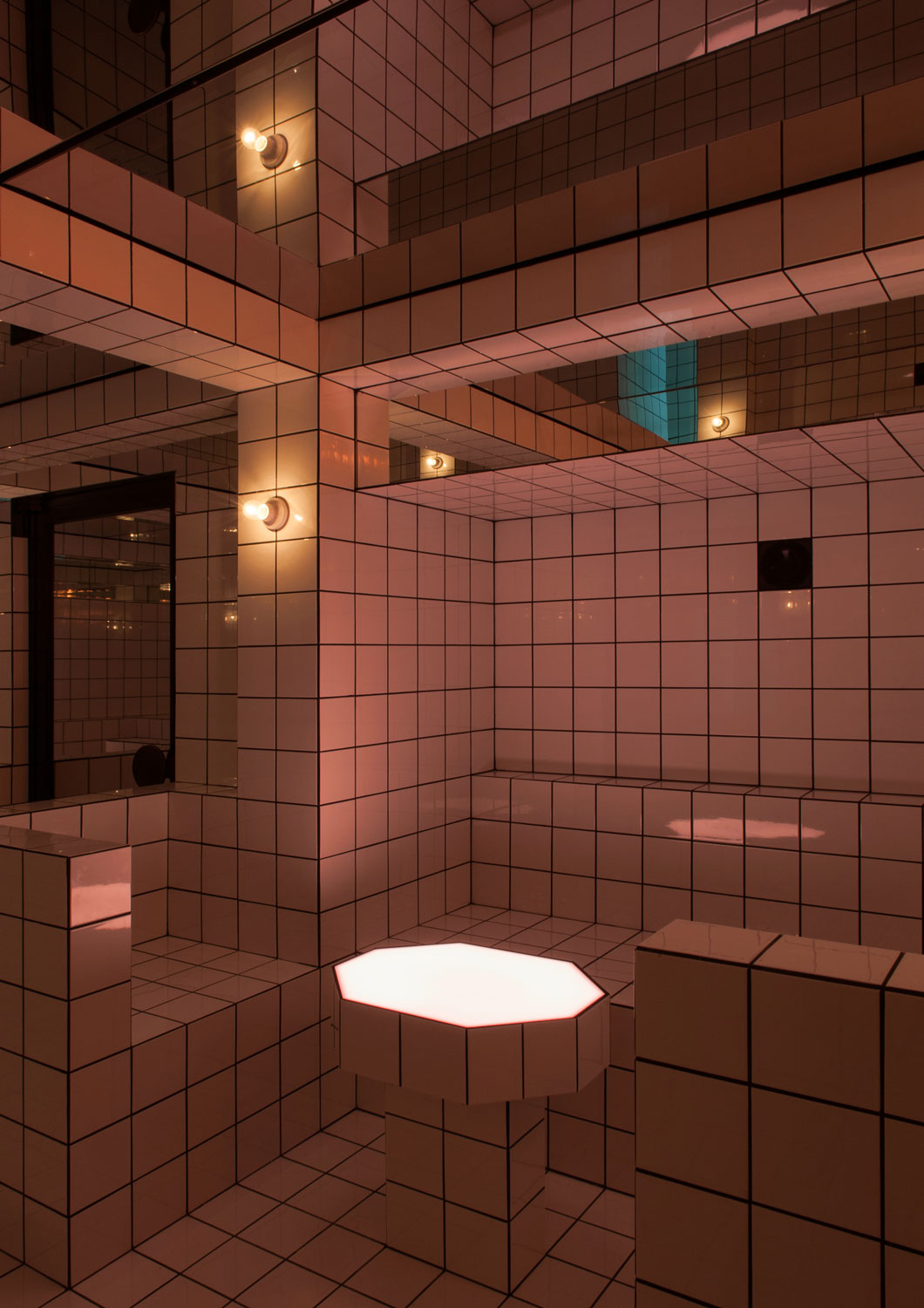 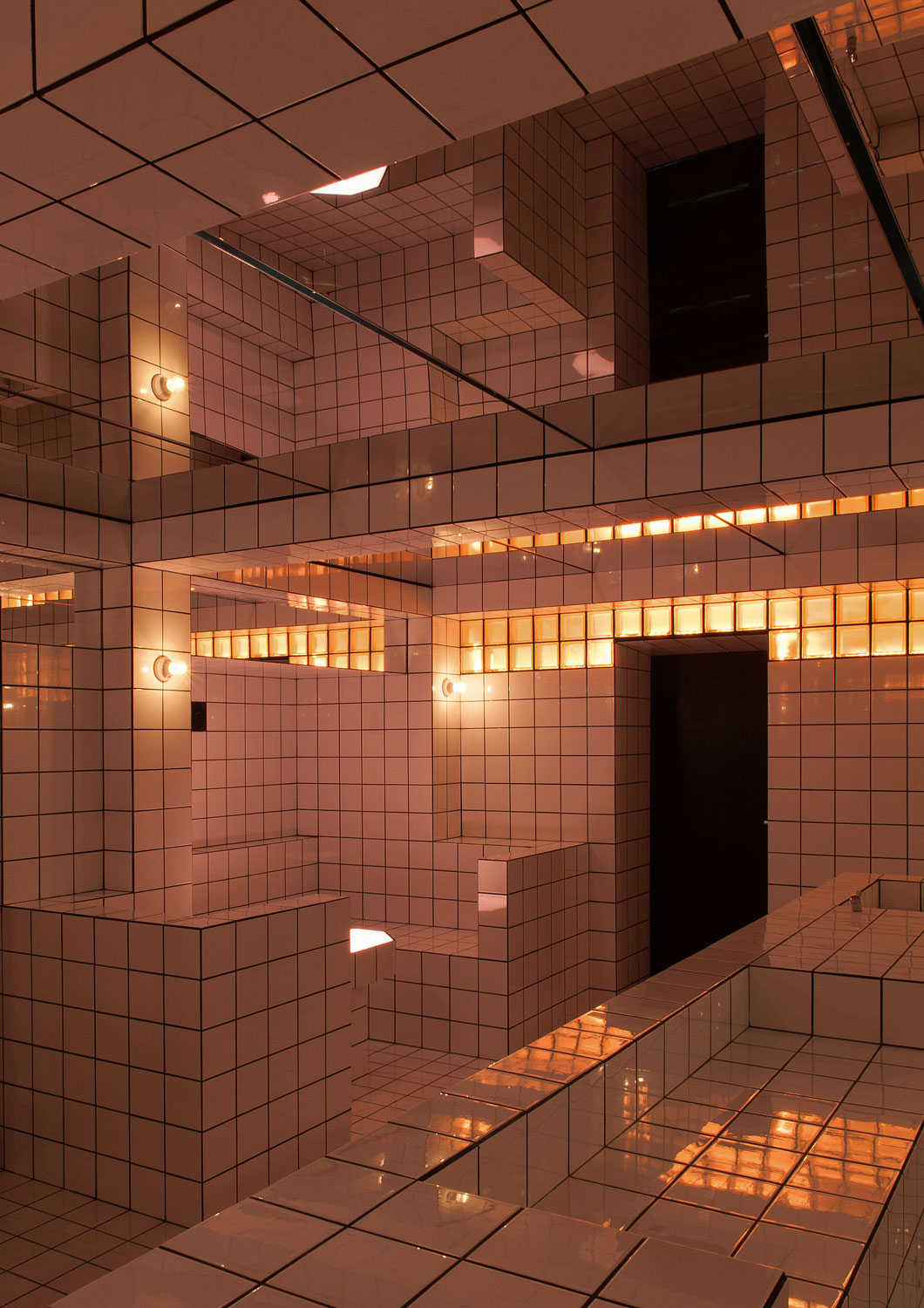 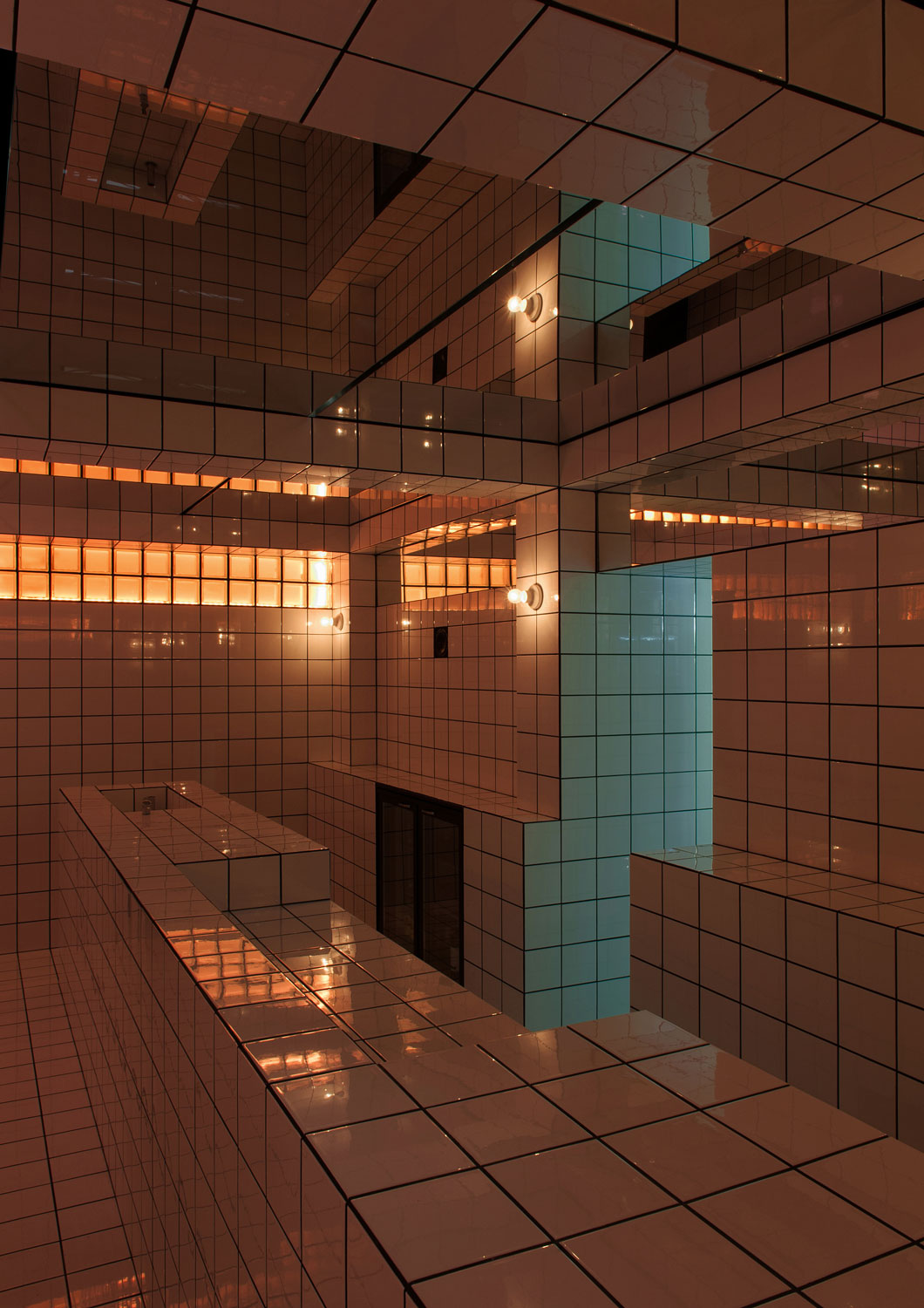 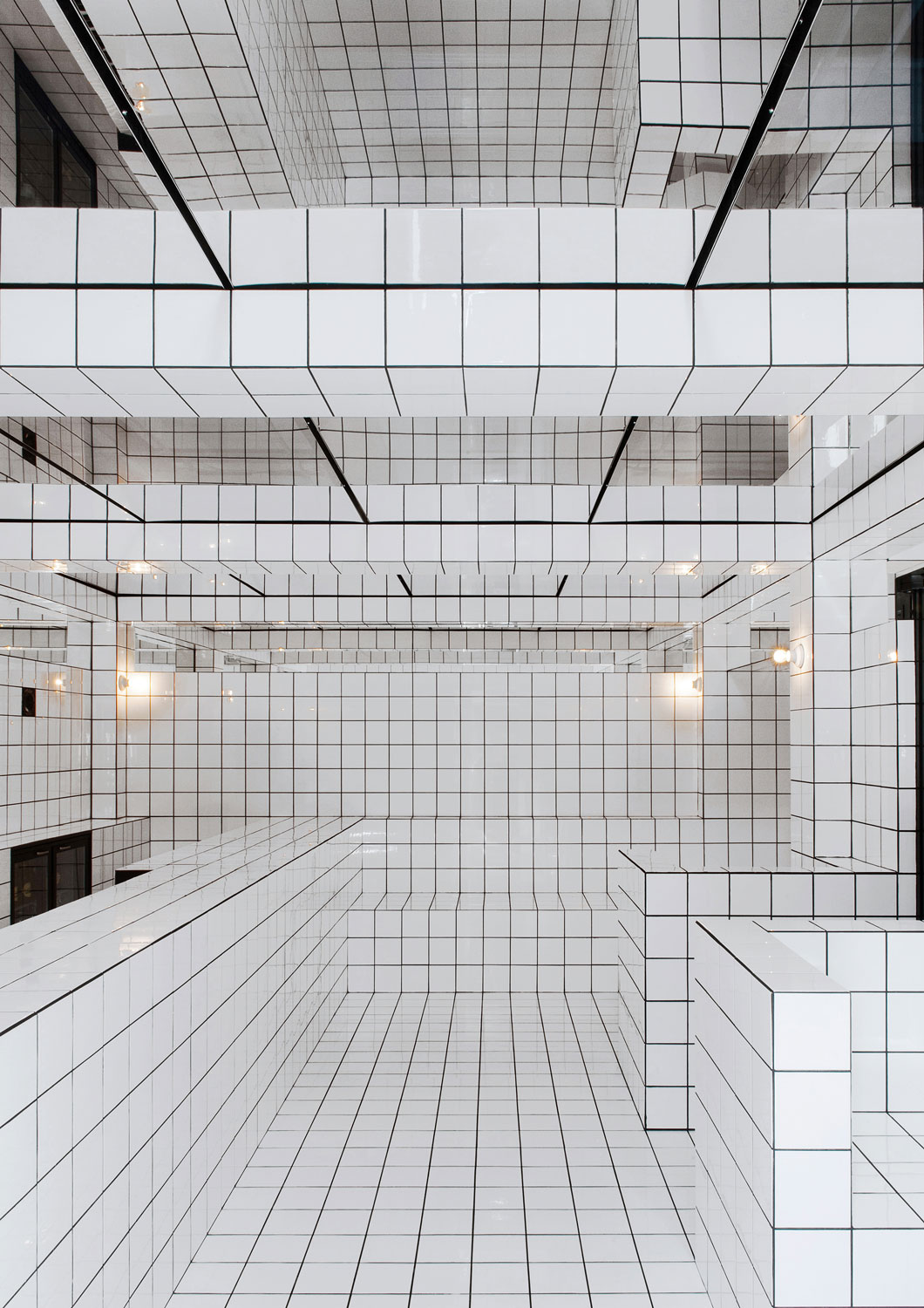 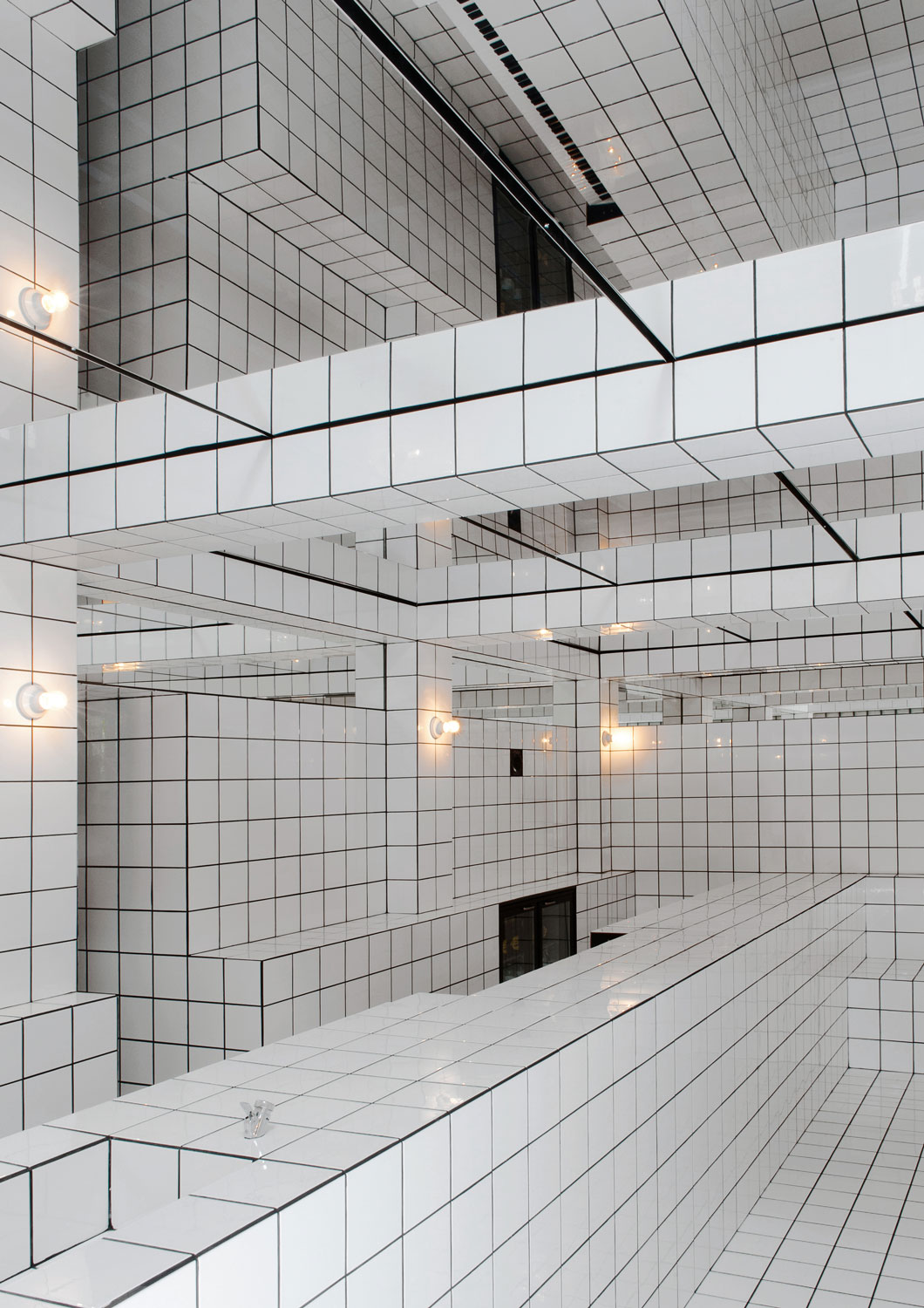 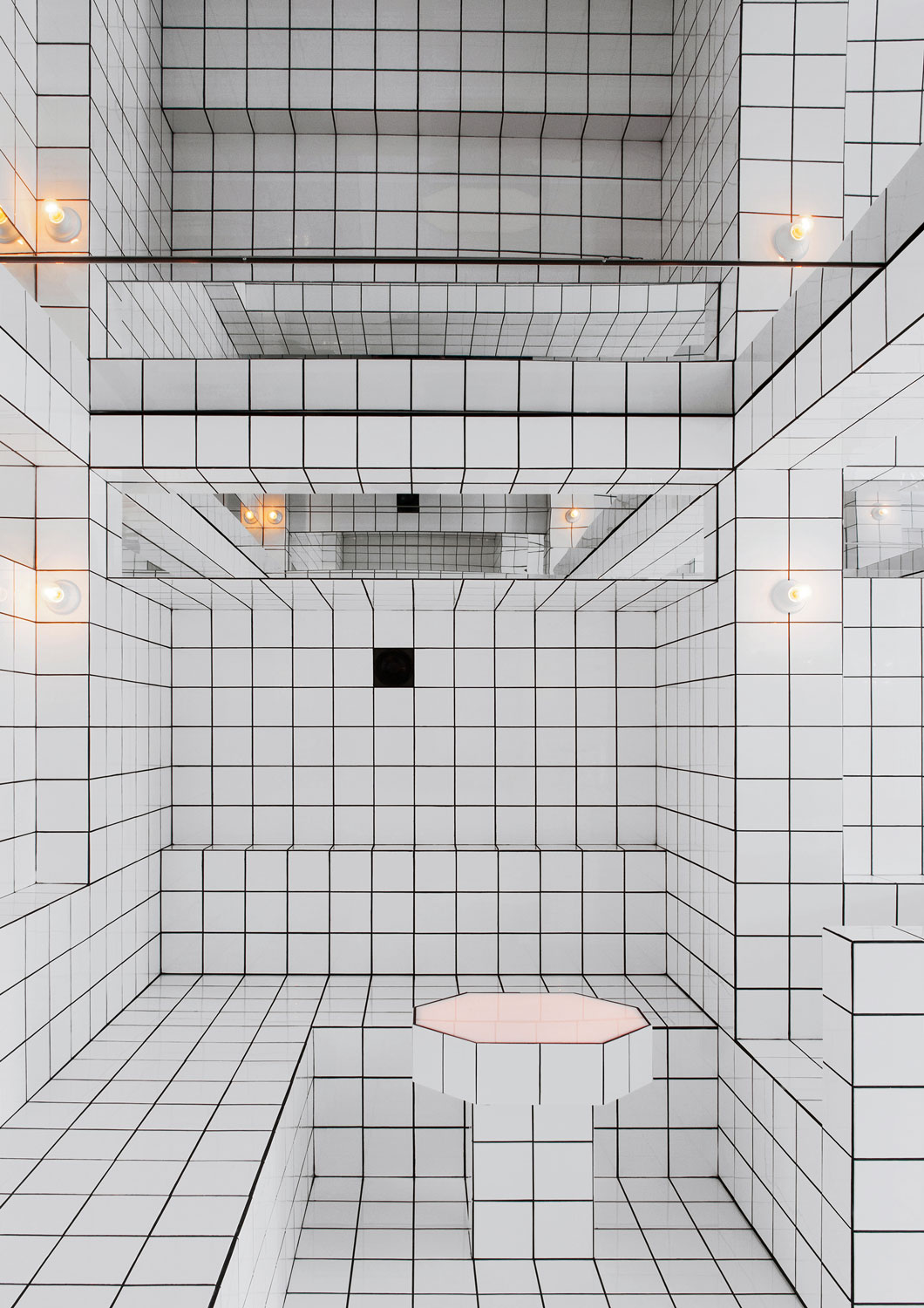 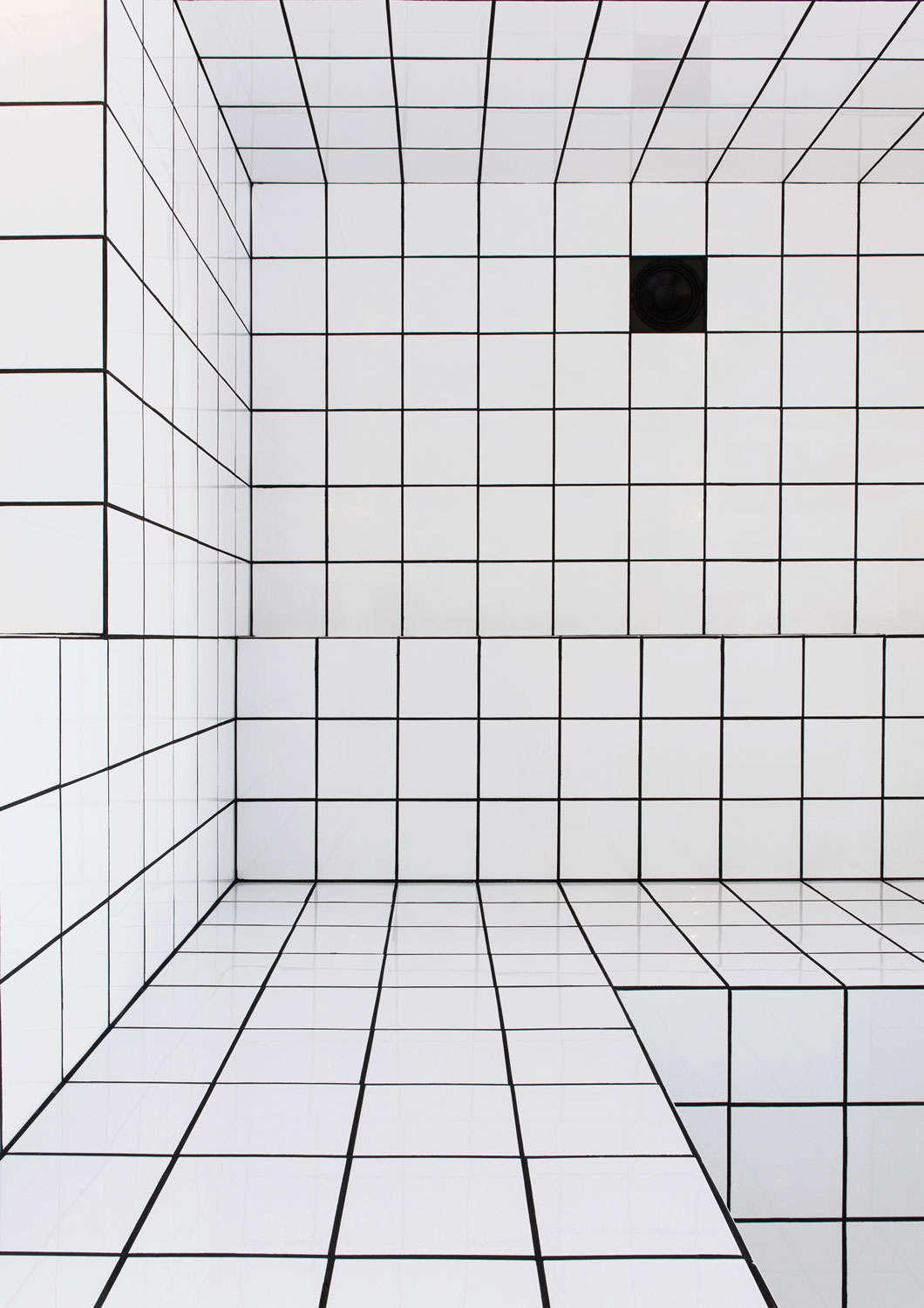 The square is the foundation of a regular geometric grid. In 1908, Adolf Loos used the equilateral rectangle to highlight the orthogonal orientation of the interior of his so-called Kðrntner Bar, the first American-style bar in Vienna. The mirrored walls conjure the illusion that the coffered marble ceiling and the marble pillars and beams continue endlessly, unfolding an illusionary space that, in its homage to the square, extends far beyond the 4.40 x 6 m real space. The seating niches and mahogany wall panelling contrast with the chessboard pattern of the floor and the transparency of the mirrors; small tables with opaque glass tops illuminated from below give the drinks an alluring glow. Originally conceived as a stand-up bar, the Loos Bar, as it is called today, is an urban interior, a social space transgresssing class divisions and a condensed social stage. Adolf Loos believed that architecture goes beyond the functional to create resonating spaces for a liberal and democratic society. Consequently, for him, the language of architecture articulates itself not only through an abstraction of means, but also through recourse to everyday typologies. Things happen in places.

Designed by Christoph Meier, Ute Müller, Robert Schwarz and Lukas Stopczynski, the LAX BAR, a copy of the Loos Bar, emphasises this aspect of the social sculpture that turns viewers into actors. In contrast to the original, however, it is a walk-in sculpture with a makeshift character and only officially operates five times. The LAX BAR reduces architecture to its very essence and centres around a seemingly simple design that underlines the sheer impact of the material while at the same time rejecting the material opulence of Looss original version. The bars displacement, its own temporality as a different place, is also celebrated. When the door to this inconspicuous building opens, the visitors, like Alice in Wonderland, fall down a kind of rabbit hole: They enter a completely white tiled room that could be anywhere, that seems different from the outside world and yet is part of it in a strangely displaced way. The artists behind the bar counter await orders.

The French artist Jean-Pierre Raynaud is known for tiling entire houses with white square tiles. His intention was to use a mundane mass article to create absolute spaces characterised by a rigid grid. His La Maison de la Celle-Saint-Cloud in Paris, which opened in 1974, was both his residence and an art installation at the same time. The walls, floors, ceilings and fixed furniture were completely covered in white ceramic tiles measuring 15  x 15 cm. The black grout between the tiles created the minimalist grid that also characterises the LAX BAR: an all-over design of tiles and grout that repudiates practically any direct reference to the outside world. A variation of the Loos Bar in terms of proportion and interior design, the LAX BAR also makes use of mirrors as the basic form of pictures as a way of inscribing visitors into the architecture. While the side mirrors are mounted in such a way that one cannot see ones reflection, the mirrored ceiling transforms the lively space into a mise en abyme, an infinite image within the image.

The LAX BAR is already the artists third edition of the legendary bar designed by Adolf Loos. In Los Angeles, the adaption of the Viennese architectual icon was obvious. A residency at the MAK Center for Art and Architecture in the Mackey Apartments of R.M. Schindler (a well-known student of Loos) inspired the creation of this first DIY-style replica of the bar in 2015. In a garage behind the modernist apartment building, marble became OSB, glass became mosquito mesh fabric, wood became cardboard.

In 2017, another incarnation of the famous bar saw the light of day: at Etablissement den face in Brussels. This time the team reconstructed the Strohkoffer in the venues basement. The original Strohkoffer was a meeting place for artists located under the Loos Bar in Vienna that operated from 1951 to 1953 and was named after its straw wall coverings. During the day it was a gallery and in the evening a popular watering hole frequented mainly by young artists, authors and musicians. One could say it was something like Viennas first artist-run space. In the STROOKOFFER in Brussels, the quartet of artists transformed the original into a bar. They covered the walls with straw mats, as seen in historical photographs, but transferred the interior architecture of the Loos Bar to the basement and adapted it to the scale of the room.

All three versions required that the original floor plan be scaled in accordance with the available space, leading to modifications that impacted the overall concept of the bar. The LOS BAR in Los Angeles was the same length as the Loos Bar in Vienna, but 33 % narrower and lower, which was reflected in the inferior materiality compared to the original, but also in music that was played a third faster. The space of the STROOKOFFER in Brussels was the same width and height as the original, but 44 % longer. Accordingly, everything was stretched and a little slower. The spatial dimension of the LAX BAR is similar to that of the Loos Bar, but here the ceiling is only about half as low and therefore the music is lower, meaning that all pitches are transposed down in the same ratio. When, in keeping with the tiled and grouted concept, The Art of the Fugue by Bach resounds from the loudspeakers positioned around the room1), the LAX BAR mutates into a surreal sound box in which the neon tubes below the endless mirrors pulsate in time to the music.

Music is part of the LAX BARs DNA on another level as well: the bar was created on the premises of the former Schallplatten Brigitte, which opened in 1959 and was one of the first record shops in Vienna. Even the first sketches of the stores interior already show a distinct grid that now dominates the bar and the pattern of white tiles with black grouting. And the faÓades structure and the engaged sheet-brass columns are also reminiscent of the entrance portal of the Loos Bar with its glass mosaic resting on marble pillars. And the signage displaying the shops name consists of  squares! The LAX BAR has been temporarily inserted into the empty shop. It begins behind the original entrance, where a room has been placed into the existing space in accordance with the dimensions of the Loos Bar. This spatial similarity to the original compensates for the abstraction of the tiles: While numerous details evoked the legacy of Adolf Loos in Los Angeles and Brussels, the LAX BAR in Vienna consistently focuses on conceptual minimalism. And on a twist that counteracts the elegance of Looss style: In the place where the entrance to the original Kðrntner Bar is located, visitors will find the way to the toilets, which are outside the bar. In order to enter the bar from the point corresponding to the originals entrance, visitors must come from the toilet. The prosaic associations of the tile-grout interior (a sobering cell, psychiatric ward or butchery) also counteract the Loos Bars noble spirit of modernity. Quite simply, the only luxurious element of the LAX BAR is time: After five weeks its all over

In his 1979 essay Der Loos-Gedanke the Viennese architect Hermann Czech wrote that Looss rejection of ornament was primarily directed against those forms that are not thought.2) The abstract thought does not find translation into an abstract form, but a specific solution develops out of it. This is perhaps the LAX BARs closest correspondence to the Loos Bar: to translate the concept of a work of art as a social place into the format of a festivalvia a sculptural intervention that rethinks the idea of social sculpture.